The spatial properties of a noise field can be described by a spatial coherence function. Synthetic multichannel noise signals exhibiting a specific spatial coherence can be generated by properly mixing a set of uncorrelated, possibly non-stationary, signals. The mixing matrix can be obtained by decomposing the spatial coherence matrix. As proposed in [1], the factorization can be performed by means of a Choleski or an eigenvalue decomposition. In this work, the limitations of these two methods are discussed and addressed. In particular, specific properties of the mixing matrix are analyzed, namely the spectral smoothness and the mix balance. The first quantifies the mixing matrix-filters variation across frequency and the second quantifies the amount of input signals that contribute to each output signal. Three methods based on the unitary Procrustes solution are proposed to enhance the spectral smoothness, the mix balance and both properties jointly. A performance evaluation confirms the improvements of the mixing matrix in terms of objective measures. Further, the evaluation results show that the error between the target and the generated coherence is lowered by increasing the spectral smoothness of the mixing matrix.

In the following examples, we present the output signals obtained by mixing mutually uncorrelated input signals. The input is generated by splitting a mono signal into consecutive audio chunks, one for each channel. The input signals are then filtered and summed by means of a mixing matrix to obtain output signals exhibiting a target spatial coherence. The mixing matrix is obtained by decomposing the target coherence matrix, which can be chosen arbitrarily. This simulates a desired spatial response, given the number and the positions of the microphones.

Optionally, the smoothness and the balance can be enhanced by the proposed methods.

We simulated the spatial response of people applauding around a microphone array in a closed room. The microphone positions were such to obtain a non-uniform linear array of 4 microphones with inter-sensor distances of 2,3,4 cm. The target spatial coherence was a spherically isotropic (3D diffuse) model. The mono signal contained only two people clapping. The objective was to obtain output signals resembling an applause of several people.

In addition to obtaining an accurate desired spatial response, we increased the mix balance: each output channel contains similar contributions of the input signals (CHD balanced). However, this results in mixing matrices that are dissimilar traversing the frequencies. This causes significant distortions. Hence, we induced spectral smoothness: we minimised the variation between mixing matrices across frequency while preserving the mix balance (CHD balanced and smooth). This way, the output signals are perceptually more plausible. 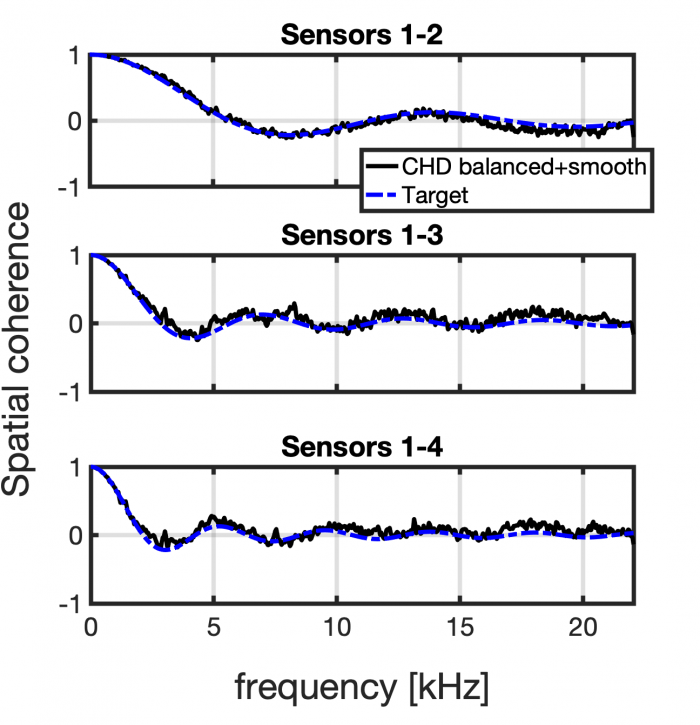 We simulated the spatial response of rain recorded by a microphone array. The microphone positions were such to obtain a uniform circular array of 4 microphones with a radius of 1 cm. The target spatial coherence was a cylindrical isotropic (2D diffuse) model. The mono signal consisted of a single-channel recording of light rain. The objective was to obtain output signals resembling a medium-strong rain.

The baseline approach was given by the eigenvalue decomposition (EVD). Although this solution yields a well-balanced mix, it is not spectrally smooth. This results in significant audio artifacts in the output signals, especially during transients.

We also included the output signals of the EVD to which we induced balance (EVD balanced). Significant distortions are present similarly to the previous example. We then induced spectral smoothness while preserving the balance using the preferred method (EVD balanced and smooth). Once again, the last method reduced the distortions while yielding a balanced mix. 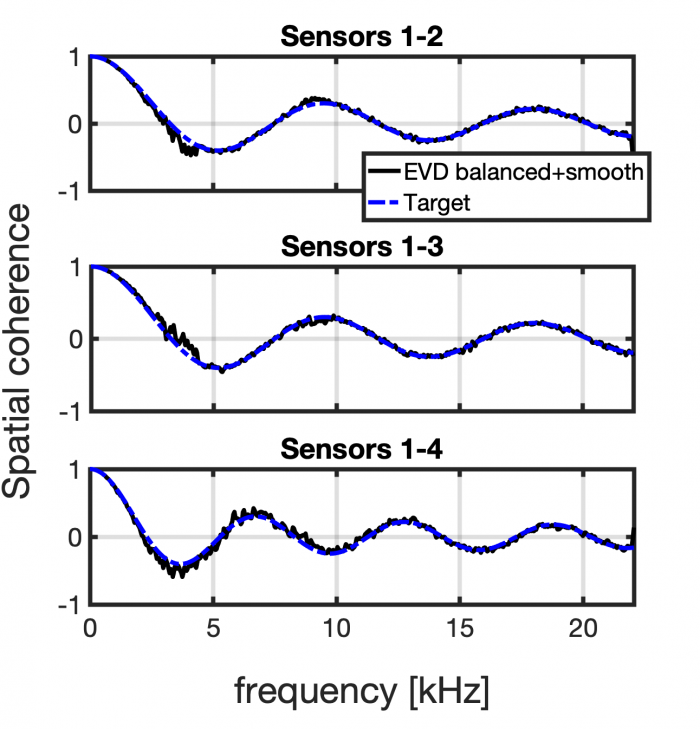